A few weeks ago, I was driving home from the Windmill (my favorite hot dog place) on the Garden State Parkway when something caught my eye. 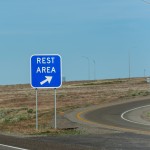 I think I must have been “halfway there” because I looked to my left and saw Jon Bon Jovi’s name and a guitar in neon lights on a building where there would normally be a rest stop. I figured he was doing a benefit concert for one of his charities (or his favorite politicians) and kept on driving.

Initially, I wondered what he ever did to get a rest stop named after him? But then I thought, wait a minute, is this really a good thing? Then again, let’s face it, people have been dumping on Bon Jovi for close to 40 years now. Why not make it official?

Most of the other rest stops in the state are named after people who have passed. There’s even one named for Frank Sinatra. Can you imagine what his reaction would have been if he were alive?

“You want to name a house of toilets after me? Fuggedaboutit!”

It made me think of some of the other Jerseyans they probably approached before they went to Jon Bon Jovi.

“Hello, is this Bruce Springsteen?”

“Boss, we’d like to name a Parkway rest stop after you…”

“Stevie, you got me. Funniest joke ever.”

“Hello, is this Mr. Frankie Valli?”

“Mr. Valli, we are huge fans; we’d like to name a Parkway rest stop after you…”

“Hello, is this Joe Pesci?”

“Mr Pesci, we loved you in Goodfellas so much that we’d like to name a Parkway rest stop after you…”

“Hello, is this the Jonas Brothers??”

“(screaming and panting) OMG, we’d like to name a Parkway rest stop after you…”

Now, look. I happen to like Bon Jovi. I have most of their records and have seen them in concert a number of times. But a Parkway rest stop? Weren’t there any streets available in Sayreville? Or benches on a boardwalk somewhere down the shore? I mean, what is their ad campaign?

“If you’re driving on the Garden State Parkway and ‘Livin’ on a Prayer’ after eating some bad sushi, visit us at the Jon Bon Jovi Service Area!”

“The Jon Bon Jovi Service Area: We give toilets a good name.”

On a steel horse you drive

If you don’t get here quickly

You’d rather be dead than alive

But you ain’t gonna hold it forever

You just want to make it to the Jon Bon Jovi Service Area.”

“When you have to let it go

(Wash your hands) When you want to let a feeling show

(Wash your hands) From South Amboy to Ramsey

(Wash your hands) From Asbury Park to Atlantic City

(Wash your hands) At the Jon Bon Jovi Service Area.”

I could go on, but you get the idea. I don’t know about you, but aren’t there a hundred other things you’d rather have named after you? John Lennon has an airport named after him. Freddie Mercury has a huge statue in Geneva. Kurt Cobain has a park in Seattle. Hell, I would be honored if they named a hot dog at the Windmill after me! But someone as famous as Jon Bon Jovi? Whether you like him or not, he has done a lot of amazing charitable things. It’s true he hasn’t had a hit in a decade, but the guy has to be worth $100 million. I just don’t see how he gets the call and says, “Oh yes, that’s a great idea. I want people to think of me every time they have to go to the bathroom! Sign me up!”

Anyway, every Friday night, I drive by and chuckle. My face just gets flushed from the laughter…

Come and see everything you need to survive at NORTHEAST® 2022! March 18-20, Meadowlands Exposition Center, Secaucus, NJ – Register NOW at aaspnjnortheast.com.