Blending panels takes more time and skill than a simple refinish job, yet for decades, shops have charged fewer labor hours based on the formulas provided by the major information providers (IPs). 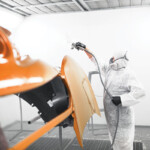 While Audatex, Mitchell and CCC define refinish times differently, they all utilize a uniform blending formula of 50 percent of the refinish time on two-stage refinish, with CCC and Mitchell utilizing a 70 percent formula when blending three-stage colors…values proven to be grossly underestimated, based on the recent blend study conducted by the Society of Collision Repair Specialists (SCRS) in collaboration with AkzoNobel, Axalta, BASF, PPG and Sherwin-Williams.

“For decades, we’ve asked the IPs to address this issue, and they didn’t. So, rather than continue to ask, we performed the study ourselves, in the company of all five major North American coatings providers and an independent audit firm to validate the process, the data collection and the reported results,” explained SCRS Executive Director Aaron Schulenburg.

Demonstrating the consistency of the overall average which reflected a variance of less than six percent between all five participating companies, he shared the overall average when looking at all colors, companies and variations was “31.59 percent greater than the full refinish value. That’s certainly different than 50 percent less than.”(Check out the recap of the study unveiling at grecopublishing.com/hd1222cic2022.)

New Jersey shops weighed in on the study’s findings.

“I have said all along that it takes more time and skill to blend a panel than it is to paint a new panel,” said Dave Thompson (Lakeside Collision CARSTAR; Mt. Laurel).

Dennis Cataldo Jr. (D & M Auto Body; Old Bridge) sees the blend study as “an accurate assessment of the blending operation. In order to blend a panel, you need to sand the entire panel and then clear the entire panel once the blend is completed. To allow for half the amount of time to complete the same procedures of a full refinish is ludicrous. I have been listening to my father make that argument for 30 years, and I regret to say I will be making it for another 30. I think most of the posted labor times in the repair/estimating guides are inaccurate. Furthermore, when you compare system to system, you get broadly different figures. Something is wrong. The Database Enhancement Gateway (degweb.org) does what it can to help us resolve some of the issues; however, most of the errors fall by the wayside as most shops do not challenge them.”

As a painter, Ken Miller (821 Collision; North Haledon) insisted, “We all knew in our hearts that it took more time. But this study finally proved it, and SCRS covered every single base in making their case.”

Michael Bavaro (Bodymotion; Ocean Township) also praised SCRS for taking the time to conduct the study. “If body shops did this test, they would be accused of bias, but this unbiased study adds credibility to our experiences over the past 40 years; the blend formula wasn’t right back then, and it’s even less so now. Their results honestly seem pretty conservative. It takes every bit as much time as the study shows, if not more.”

Bavaro discussed the study with several team members, including his painter and shop manager, and they all shared a “united opinion. Blending a panel requires more preparation, and then once it’s ready, it takes more time to paint. You keep going when you paint an entire panel, but with blending, you spend extra time to get that right. And blending also requires consistently more material than merely refinishing a panel, yet shops get compensated based on those IP systems, and I don’t know where they even get their numbers from. They probably did their research on a black 1955 Chevy and never updated it since then.”

“CCC’s study was done 40-50 years ago, based on lacquer, and they won’t share their ‘proprietary information’ with anyone,” according to Jerry McNee (Ultimate Collision; Edison). “Well, how does the wet bed include blending when a wet bed wasn’t even available half a century ago?! Water-based paints don’t lay the same, so I don’t see how it’s feasible to use a formula that was developed long ago based on a completely different product.”

Shops already knew that blending took significantly more time (and skill!) than refinishing, so what’s next?

“We are speaking directly with all three of the information providers. It is our understanding that each has received a tremendous amount of feedback from the industry and their collision shop end-users, as a result of the research we’ve presented in the blend study,” Schulenburg advised. “I think each is navigating their own internal process to determine how to move forward based on the presented results of our findings, and their internal procedures relative to addressing challenges raised by the industry.

“Some of this is discussion, and in other cases, it’s commitment to research and updates,” he continued. “CCC has committed that based on the recent database inquiries regarding MOTOR’s guidelines for blending adjacent panels, and in accordance with MOTOR’s standard operating procedures, MOTOR will conduct observational studies of the blend process. MOTOR will provide an update at the end of the first quarter of 2023. This is a great example of an action that we had previously requested prior to the study, that is now taking place because of the study. It’s our hope that the feedback, the research we’ve produced and a closer look at complexity of colors and advancements in color systems will lead anyone who earnestly researches this topic to the same conclusion that we came to.”

New Jersey shops believe that the IPs will need to play a large role in insurers accepting the results of the blend study.

“I am hopeful that something good comes out of this study so that the information providers change the times to reflect the times it takes to do these repairs correctly,” Thompson expressed. “One of the intangible things is the skill it takes. I have recently seen videos of robots painting bumper covers. That just shows the skill needed to do a blend. They can program a robot to paint a panel but not to do a blend to a panel!”

Bavaro agreed that blending requires skill, as well as education and equipment, yet “with the low rates that insurers pay, shops are subsidizing these blends if they do them correctly; we’re losing money. You can’t get someone to mow your lawn at these rates, and blending is a difficult task that nobody seems to appreciate, but it’s sure obvious when you see a mismatched panel in a parking lot. I’m not sending anything out of my place that doesn’t match, and we do this day in and day out, so we know how much time it takes and the amount of material we spray. For years, we’ve been talking to adjusters, but they just shrug and point to the IPs. It feels like we’re talking to a wall, but we’re not going to give up. Hopefully, the IPs will take this study into consideration and adjust their formulas to a more reasonable rate.”

On the other hand, each shop should be run as an individual business, and while insurers often exert pressures, typically based on data found in the IPs’ systems, they are not the customers. Some shop owners believe that the onus for change lies in their own hands.

“I do not know how the providers will respond, but I am certainly curious if they do. I think a response is needed, and I feel our industry requires a response,” Cataldo stressed. “As for the insurers, it’s just another item they can say no to. I think the only way to effect change in this industry is to start having vehicle owners question why their insurance companies are not reimbursing them correctly.”

“As a former painter, I recognize the blends needed to accommodate today’s color matches, and we all know the amount of talent that goes into it,” McNee emphasized. “I don’t want this to be a flash in the pan, like the John Eagle case, where it’s huge news one day and then everyone goes back to the status quo. It’s really the shops’ fault for letting that happen. So, now that we’re faced with this blend study, what are we doing with it? I’ve talked to every insurance company that comes into my shop about it, and while they’ve all heard about it, what they’re going to do with it is a different case from one company to the next. Many will do whatever benefits them, but it’s up to the auto body industry to keep pushing it and keep it alive so we can see the change we need.”

“The study shifts the conversation from anecdotal, to evidence-based. It’s data to point to when evaluating whether or not to use the formula presented in the guides. It’s important to reinforce that all three estimating products are just that – guides – not fixed or rigid solutions, even if that is how they are sometimes used. Until there is change, the study provides clear transparent information that can be used like any other documentation to substantiate a repair operation or charge on a repair order.”

He also believes “There is value in helping to carry the water. If you are familiar with the study (available at scrs.com/blendstudy), have you shared it with your jobber? Have you raised awareness amongst your team members? Have you communicated your perception of the results to your information provider? All of these are conversations that help benefit the end-user.”

Miller agreed that it’s up to the shops to use this data to benefit their businesses. “What will the industry do versus waiting for someone else to do it for us? We need to have discussions around this study and come up with ideas about how we can deal with this issue. This information is great, but it’s only as useful as the hands it’s in, and I don’t want to see it die as useless because it’s not…but we need to get out there, promote this and discuss how to utilize it. We need to stop waiting for things to happen. It’s time to take the initiative and MAKE things happen!”

McNee took it a step further, as he asked, “Will the IPs increase the formulas like they should, or will they minimize it like they normally do, to keep their biggest purchasers (insurers) happy? It’s currently in the public eye, and I don’t want our industry to let it fall by the wayside. It’s up to us to make a move; we can’t wait for someone else to step up to the plate to make our industry better. They’re not going to deviate from the book because that’s not to their advantage. It’s up to us as shop owners, as collision professionals, to push harder, to step up to the plate. It’s just a big game for them, and it’s our own fault that we let them dictate the rules while we just sit on the sidelines and take it.”

“The saying goes, ‘If you always do what you always did, you’ll always get what you always got.’ We decided to do it differently, and with substance, and I think there is a reason the results align with the industry’s perception of the task,” Schulenburg added. “Ultimately, repair facilities are responsible for independently choosing how to identify and bill for their services. Waiting for someone else to make a decision – whether it is an IP, insurer, etc. – may be the equivalent of always doing what you’ve always done. I am aware of many repairers who are already actively using the information in their repair planning process effectively, a decision they’ve made based on the information available to them and their own knowledge of what is necessary within their business.”