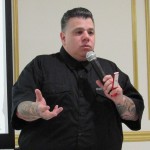 “Don’t ask a question you don’t want the answer to because I’m going to give you an answer, and I really don’t care whether you like it or not,” Larry Montanez of P&L Consultants warned during a recent AASP/NJ meeting. Held at Gran Centurions in Clark, NJ, the in-person estimating seminar focused on Toyota required procedures, not-included items, estimating consistency and more.

“Who’s had a technician put a quarter panel on a vehicle, and it’s been dead wrong?” Montanez asked. “I’m trying to save you time, effort and energy.”

Guiding nearly 100 attendees through the process of writing an estimate to replace a quarter panel on a 2020 Toyota Camry, Montanez recommended repairers start by visiting I-CAR’s Repairability Technical Support (RTS) and then proceeding to Toyota’s Technical Information System (TIS) to review OEM repair procedures; in the example used, 33 repair procedures were reviewed to complete the repair!

Montanez touted the benefits of using the Database Enhancement Gateway (DEG), “The DEG gives you the P-Pages for CCC, Mitchell and Audatex. If you’re not using the DEG, you’re only screwing yourself.”

Stressing the importance of reading the procedures for “every single car, every single time,” Montanez examined the documents that were utilized to write the original estimate, explaining that simply disconnecting the battery requires a technician to check at least seven systems in order to ensure the vehicle drives correctly.

Pointing out that R&I for a bumper is typically a not-included item, Montanez asked attendees, “How many times have you done a bumper cover and not put that on the estimate? Now, calculate that for how many cars you’ve done, how many years you’ve done it and how much money you’ve lost just because you didn’t check it.”

It’s no secret that scanning modern vehicles is an imperative part of the repair process, and according to Montanez, even a vandalized car should be scanned.

“If someone keys and scratches the car, we’re going to scan it. The insurance company doesn’t owe you for it, but I’m scanning it for my own protection. I’m also scanning it because I know it’s got an all-around camera, and by taking off the mirror, I’m going to set a code. That pre-scan shows the insurer that I scanned it and confirmed there were no codes beforehand that were related to the incident.”

Montanez suggested sending the repaired vehicle to the dealership for calibrations due to the difficulty of performing this aspect of the repair in addition to adhering to the importance of manufacturer branding. As a result, he recommended that shops perform a post-dealer scan in addition to performing pre-repair and post-repair scans.

“Since most of my clients are heavily involved in OEM certifications, we send the repaired car to the dealership; however, the shop is liable for the repairs, so you want to make sure everything was done right at the dealership by performing an additional scan when you get it back.”

Talking about his clients and their legal battles, Montanez discouraged attendees from following in their footsteps: “Ease into it slow and steady, and take one bite at a time instead of diving in headfirst and wasting hundreds of thousands of dollars on cases. I don’t want you to make the same mistakes that my clients have made, but it’s important to realize that they aren’t trying to win that case; they’re focused on establishing case law so that they and other shops win every case after it.

“There’s a smarter way of doing it that doesn’t result in your shop getting investigated by every possible government entity,” he continued. “Unless you have an asinine amount of money and want to go to court constantly, you can’t dive in headfirst. Take one bite at a time; do it slowly and progressively, and you’ll get there over time with less hassle.”

The meeting concluded with a special Q&A segment, “Larry Live!” during which Montanez tackled some of the industry’s most pressing issues.

“Do something with the information you learn. If you’re not putting time in, don’t expect anything to come out on the other end to your benefit. It’s like a puzzle. You’ve got 1,000 little pieces, and your job is putting those pieces together to form the puzzle – and then use it. Never stop learning; there’s plenty of room for improvement. There’s strength in numbers, and if we all start doing things the same way, it’ll make our jobs and lives a little bit easier.”

For more information about AASP/NJ and its future events, visit aaspnj.org.