In a demonstration of speed and progress that is typically uncharacteristic for the government, the Labor Rate Special Commission (LRSC) issued a report detailing possible solutions within days of its final meeting. 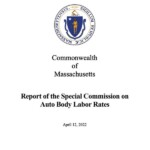 Established pursuant to Chapter 24, Section 130 of the Acts of 2021, the LRSC was created to review issues related to auto body rates and the auto body industry in an effort to determine whether legislative action is needed to protect consumers and ensure an adequate reimbursement rate to the claimant in an environment where those rates have remained nearly stagnant for the past 30 years.

At the suggestion of LRSC Co-Chair Representative James Murphy (D-Weymouth), a fourth and final meeting was held April 4, which involved a tour at Assabet Valley Regional Technical High School in Marlborough to benefit the commision as it compiled its findings. During this meeting, Murphy repeatedly reminded participants that the commission was charged with studying the issue of auto body Labor Rates and coming up with possible solutions to address that issue. He also solicited members to submit possible solutions to be included within the final report.

Throughout the hearing process, several members of the commission expressed concerns that nothing would come of the LRSC’s findings.

“I’m very fearful, honestly, that once again, nothing gets done,” he continued. “Or that a solution that’s offered up by the insurance industry is going to be so inadequate that we’re going to have a real problem going forward.”

In response, Murphy encouraged LRSC members to share their thoughts on possible solutions for inclusion in the report and expressed a hope that “together as a group, this commission can move forward in a positive direction [and] come up with some solutions that will allow cars to be properly fixed, allow the industry to survive and allow the insurance companies to do what they do.”

Within a mere seven business days, the LRSC’s final report had been drafted to include several possible solutions, and the 13-member commission voted 10-3 in favor of the report, with the LRSC’s three insurance industry representatives being the sole dissenters who provided unfavorable recommendations.

The previous commission’s findings – and the insurance industry’s resistance – were referenced early in the 2022 LRSC’s report in reference to the history of auto body Labor Rates:

“Since the Report of the Special Commission on Auto Body Labor Rates released in 2008, the Labor Rate paid by insurance companies has remained nearly the same, although the 2008 report’s recommendations stated that the Labor Rate had not kept pace with increases in similar industries. While the auto body industry’s conclusion suggested the need for immediate relief, the insurance industry’s conclusion stated that the industry and market needed time to adjust to new guidelines and standards. The Labor Rate paid by insurance companies in 2008 remains the standard today.”

Referring to verbal and written testimony provided during the commission’s four-month process, the report indicated that although “managed competition for the insurance industry ended in 2008 through changes in the Code of Massachusetts Regulations” which allowed for the negotiation of auto body Labor Rates, “the auto body Labor Rate has not increased significantly, and auto body shops across Massachusetts have stated that without an increase in the Labor Rate or the power to negotiate the Labor Rate with appraisers, auto shops will begin to close due to shop owners not being able to afford to run a business or retain employees.”

Indicating that the collision repair industry is losing technicians to other trades that can afford to offer higher wages, the LRSC’s report specifically noted that the average collision repair salary in Massachusetts is only $47,400, compared to the mean wage for all industries of $72,940.

The “Report of the Special Commission on Auto Body Labor Rates” went on to recognize that the auto body Labor Rate “has not increased significantly since 1988” and “must be addressed.” The LRSC offered six recommendations and potential solutions, including proposals from AASP/MA and the Massachusetts State Automobile Dealers Association (MSADA).

1.  Status Quo: While the LRSC noted that a possible option is to continue the current process by which insurers and body shops negotiate a Labor Rate, the commission expressed its belief that “This is not a viable option and will not provide a long-term solution to the issue of auto body Labor Rates.”

2.  Pending Legislation – Surrounding State Average: Observing that the Committee on Financial Services currently has four bills before it that would “create a government-set Labor Rate that insurance companies would be required to pay auto body repair shops based on the average Labor Rate of surrounding states,” the second recommendation focused on adoption of either House Bill 1048, House Bill 1152, House Bill 1178 or Senate Bill 711.

3.  Pending Legislation – Inflation Adjusted Rate: An alternate option includes adoption of House Bill 1111 or Senate Bill 709, which have also been submitted to the Committee on Financial Services and, if passed, would result in adjusting the 1988 Labor Rate in accordance with inflation over the past 20 years. According to AASP/MA, this would result in a current labor reimbursement rate of approximately $78 per hour in the Commonwealth.

4.  AASP/MA Recommendation: AASP/MA proposed three possible approaches to resolving the current situation. One option would be immediately increasing the minimum reimbursement rate to the claimant by $33 with yearly adjustments based on the CPI in the northeast region. Another option would be to pass House BIll 1111 in the current legislative session, but the association provided a final recommendation to pass House Bill 1111 “with an adjustment in the correction period increased from two years to three years from passage.” This would include an immediate increase of $18, followed by a $10 increase in year two and an increase of $5 (plus the CPI factor from the previous two years) in the third year; the revised legislation would also call for “continued increases or decreases based on the CPI thereafter.”

5.  MSADA Recommendation: MSADA suggested “a conceptually simple solution” in the form of newly proposed legislation. “An Act Establishing the Fair Calculation of Labor Rates Paid by Insurance Companies to Auto Repairers in the Commonwealth” would allow the insurance commissioner to set minimum hourly Labor Rates that insurers pay on insured claims based on using “100 sequential customer-paid collision repair orders or 60 consecutive days of customer-paid collision repair orders, whichever is less, from which the repairer shall calculate the average customer paid hourly Labor Rate” and which would then be “declared the minimum hourly Labor Rate that an insurer will pay to the repairer.”

6.  Legislative Recommendation – Establishment of a Labor Rate Advisory Board: The commission also suggested establishing a permanent Labor Rate Advisory Board to “address any and all issues related to auto body Labor Rates” and which would consist of the insurance commissioner, attorney general, three insurance representatives, three industry representatives appointed by AASP/MA, a member from vocational-technician schools, a member appointed by the MSADA, two consumer advocacy representatives and an economist. The Board would be charged with collecting relevant industry data and creating an annual survey. Furthermore, “in order to provide a long-term solution, the results of the survey and the collection of said data shall be reviewed and analyzed by the advisory board annually. This data shall be used as factors to provide a basis and recommendation for which the Board can discuss a fair and equitable Labor Rate.”

AASP/MA feels that establishing a Labor Rate Advisory Board should be considered as a last resort since this option is less expedient than some of the other proposed solutions. The association believes that collision shops need and deserve swift action to correct the direction the industry has been headed.

The goal of AASP/MA’s proposed tiered approach “addresses the immediate need for an increase to bring technicians back into the industry, while making the industry more appealing to younger individuals in the vocational schools. It also allows the insurance industry a corrective period and the ability to calculate their premium needs during the transition to a fair and equitable labor reimbursement rate,” the association explained.

“For decades, the insurance industry has shown an inability to even acknowledge the issue, nor change their business practices,” AASP/MA continued. “During the meetings, they offered no viable alternatives or solutions to suggest that anything other than a mandate would change the business environment. That mandate must be that insurers compensate fairly and properly for the increased cost to repair today’s vehicles.”

The veracity of this claim was confirmed by the fact that in addition to the unfavorable recommendation submitted by insurance representatives sitting on the LRSC, none of the recommendations were submitted by insurers, perpetuating their history of inaction as they continually contest efforts to ensure the safety and adequate reimbursement of Massachusetts motorists.

AASP/MA further enumerated upon its belief that immediate legislative action is needed to protect consumers and ensure the future of the collision repair industry:

“It continues to be our position that the collision repair industry has done all that it can to increase efficiencies and to contain the costs which repairers have control over. It is evident by the preponderance of the testimony provided at the two LRSC hearings that action is needed now. The consumers in Massachusetts deserve to be protected on our roadways. They should also feel confident that their chosen collision repair facility is able to maintain staff, training and equipment requirements, because they would then be adequately reimbursed for the expertise, costs and the liability involved in the collision repair process.”

The LRSC’s final report has been submitted to the Joint Committee on Financial Services and the House and Senate committees on Ways and Means.