As campaign season rages with elections around the corner, the most visible industry-related issue in Minnesota remains the implementation of new vehicle emissions requirements termed the “Clean Car standards.” 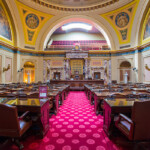 While Democrats and Republicans vie for control of the legislative bodies and Governor’s office, California’s announcement of even more stringent emissions standards (a full ban on gas-powered vehicles by 2035) has brought Minnesota’s Clean Car standards back to the forefront.

Last year, Minnesota (through the rulemaking process at the Minnesota Pollution Control Agency “MPCA”) adopted what it called the Clean Car standards. They are identical to California’s previous auto emission standards with a heavy focus on requiring manufacturers to produce and sell more electric vehicles (EVs).

There was strong and sustained pushback to the policy and to the use of MPCA rulemaking to enact it. First, the Republican-controlled Senate responded to what they deemed executive overreach by the Walz administration by signaling they would refuse to confirm (legislative speak for fire) the MPCA Commissioner, who thereafter resigned. Next, the GOP Senate pushed a bill that would strip the MPCA of their ability to engage in this type of rulemaking at all, a bill that did not become law.

During the heated election season, there have been renewed calls to move away from this approach. The Minnesota Auto Dealers Association announced that 91 candidates for the state legislature, including both Republicans and Democrats, have signed a pledge opposing the Clean Car standards.

Democrats, including the Walz administration, and Rep. Jamie Long (D-61B), who chairs the House Climate and Energy Finance and Policy Committee, have indicated they have no interest in following California’s lead in fully banning gas-powered vehicles by 2035. Instead, in the absence of banning sales of new gas cars, Long hopes to pass a bill to offer EV rebates and fund electric vehicle chargers. (See bit.ly/MNCAban).

Given the controversial nature of this issue and California’s move to an even more stringent standard will ensure the policy will be front and center of the 2023 legislative session, regardless of party control. Please stay tuned for the next issue of AASP-MN News, where we’ll do a deep-dive into election results, what it might mean for industry-specific issues, and most importantly, AASP-MN members’ priorities.

Want more? Check out the November issue of AASP-MN News!